Start a Wiki
Lonely Hyper Refresh (LHR) is a technique that originated in Bejeweled Blitz (Facebook and older Mobile versions). It is one of few techniques that can be performed without utilising Elite Technique.

LHR exploits a built in "cool down timer" that is programmed into the game to prevent a newly-created special gem from being activated immediately after its creation due to chain reaction from other Special Gems on the board.

Have 2 hypercubes next to each other, 1 being a gem formation to create a hypercube (5 gems in a row)

This next part is important because timing is key, you need to have a quick reaction and once the cube you've just swapped has just been created, swap the other hypercube that's been sitting there with the one you've just created as it transforms.

Once the swap has been made, there is an indication to if you have performed it correctly or not, if all but 1 are highlighted during the clear out, if everything is highlighted it means you'll not have that hypercube remaining when new gems are being set. 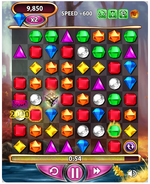 Step One - A potential LHR board, observe the Orange gems to the right of the existing Hypercube at centre-left.

Step Two&Three - Creating the second Hypercube with the aformentioned Orange gems, once created immediately trigger DHR using the already-existing Hypercube. Note that the new Hypercube can be in mid-air for LHR.

DHR nearing its end, note how the newly created Hypercube remained in its place. 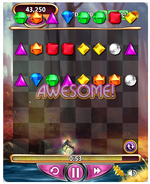 The board being refilled of gems, the newly created Hypercube will now be useable.
Add a photo to this gallery
Retrieved from "https://bejeweled.fandom.com/wiki/Lonely_Hyper_Refresh?oldid=16968"
Community content is available under CC-BY-SA unless otherwise noted.