Bejeweled 2 is the second game to be released in the Bejeweled series. It is a sequel to Bejeweled.

There are nine game modes total and they are:

In this game, the player keeps on making matches to score points and to fill the bar at the bottom to complete the level. The game ends when no more moves can be made.

In this game, it's like Classic, except the bar retracts when a move is not made. The player must make matches to increment the bar. The bar must be filled completely to complete a level. The game ends when the bar completely recedes.

The player is given 80 puzzles, divided into sixteen planets with five puzzles each. To solve a puzzle, all gems must be cleared. If no more moves can be made, the player is given the choice to reset the puzzle or to undo a move.

This game, as the name implies, never runs out of moves and the player may play as long as he/she wants. Like Classic, the player makes matches to fill a bar at the bottom. Completing levels increments the "necklace" that adorns the scoreboard and level counter.

In some versions of Bejeweled 2, all of these modes are unlockable by doing certain requirements and most of them can be accessed by clicking the Mystery Button at the bottom of the Main Menu screen. They are:

This mode is similar to Classic, however with some twists including every second move that makes gems go upwards and a slower game speed. It is unlocked when level 17 is completed in Classic mode.

This mode is similar to Action, however with a faster game speed about four times the game speed in Action. It is unlocked when level 8 is completed in Action.

This mode reprises the same 80 puzzles from Puzzle, but every move now scores points. No score is awarded for a puzzle is a Hint is used. If no more moves can be made, the player is given the option to either reset the puzzle, undo some moves, or click hint to go back to the last solvable state (points are still given after this action is made). It is unlocked when Puzzle mode is completed.

This mode is the same as Endless mode, but with rocks and bombs are incorporated into the game field. Level-up bar increases and points can only be received with Special Gem detonations. It is unlocked when level 280 is completed in Endless mode.

This mode is similar to Classic mode except it applies the basic gameplay of Bejeweled, where special gems cannot be created. Unlike rest of the unlockable modes, it is not accessible with a menu button. In the Windows and Mac versions of this game, it is accessed by hovering the four game mode buttons clockwise eight times in the main menu.

Two new features were added to the game, which were Special Gems. They were:

Two gems were added in the Puzzle and Finity modes. They are:

This game was composed by Peter Hajba (known by his scene-name Skaven) and its game music exists under the filename BeyondNetwork.mo3. Programs like Open ModPlug Tracker (abbreviated as OpenMPT) can open and edit MO3 files, but cannot be saved as MO3 (since MO3 compressor is a standalone software and not included in OpenMPT).

This Track Works Only In Main Menu

This track is played on the loading screen and on the main menu screen after finishing Final Destination. 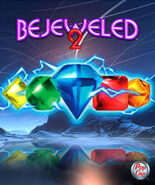 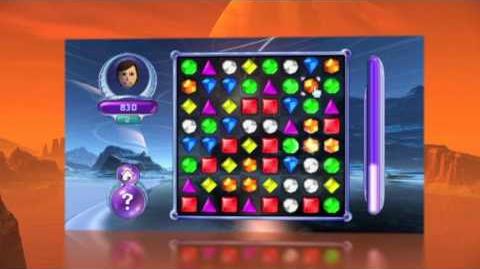 Bejeweled 2 WiiWare Game Trailer
Trailer of the WiiWare version.
Screen shot 2017-10-16 at 11.16.40 AM.png
The star explosion warp.
Add a photo to this gallery

Unnamed Planet
Add a photo to this gallery
Retrieved from "https://bejeweled.fandom.com/wiki/Bejeweled_2?oldid=19226"
Community content is available under CC-BY-SA unless otherwise noted.