Start a Wiki
Bejeweled was the first game that was released in the Bejeweled series.

It was first released as a free flash game around 2001, originally with a time limit.

Formerly titled Diamond Mine, this name was deemed too similar to a game called Diamond Mines, a game published by Microsoft. Microsoft suggested PopCap to change the name to Bejeweled.

The game was later ported into other platforms such as Windows and Mac, as Bejeweled Deluxe (although, early versions of this game was titled as Diamond Mine). This version uses new 3D graphics including the gem spinning when clicked; iPod; Xbox (on Xbox Live Arcade); mobile phones (as J2ME); and more.

There are only two game modes in this game, and they are:

Also known as Classic mode in some versions, the player must make matches to fill the bar at the bottom, when it is full it warps the player to the next level. The game ends when there are no more moves that can be made. Early versions of the flash game do not have this mode.

Also known as Action mode in some versions, the game starts with the bar half full. It will then start to decrease every second, and the player must make matches to add more seconds, with bigger moves getting more time. The player will be warped to the next level when the bar is full; the game ends when the bar empties. When no more moves can be made, the game reshuffles the gems.

The music in the game were done by Peter Hajba (aka Skaven). There are three soundtracks in the entire game.  Each mode has its own music:

The title that shows when there's no moves in Normal gamemode

Stats Screen when you end a game

Gameplay on the online version. 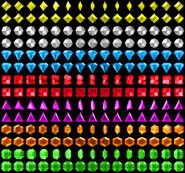 Sprite sheet of the gems. The upper line of each one type is how they twist when being chosen to make a move, while the lower line is how the gems glow when sitting on the board unselected.
Add a photo to this gallery 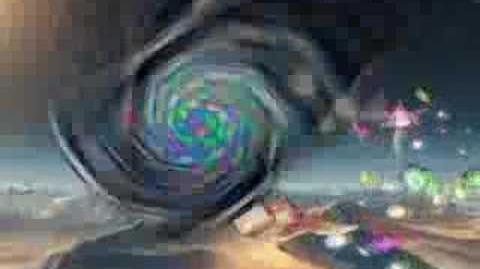 Bejeweled - Mobile phone trailer
Add a photo to this gallery

Retrieved from "https://bejeweled.fandom.com/wiki/Bejeweled?oldid=20929"
Community content is available under CC-BY-SA unless otherwise noted.